One thing I REALLY don’t like doing is landscaping.  I love the outcome, but I hate putting in the manual labor.  Don’t get me wrong, I don’t dislike all landscaping- I like planting flowers and watering them…. but as for the heavy duty stuff- I’m all set.  My backyard is decent, but things can always be improved, right?  That’s what I thought.  The other day I posted this lovely picture on Renewed Reloved’s facebook page, and mentioned that my gate opens to my backyard just like it.

However this one is so nice and tidy, clean and pretty….. 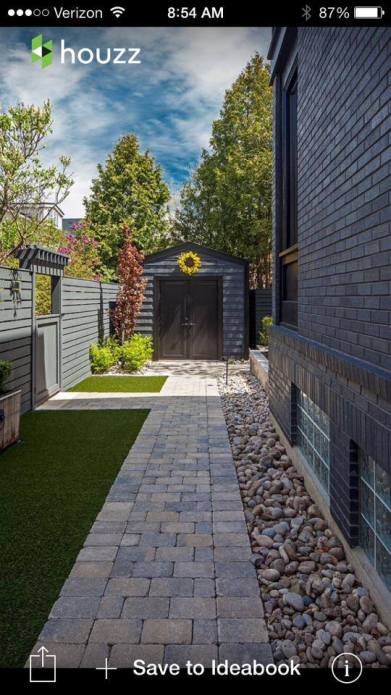 THIS is my reality

See the similarities? Haha, no not yet, but the potential is there!  One thing I HATE is when people use stones and little pebbles to fill in their landscaping.  I know its easier than maintaining grass and flowers, but they end up everywhere.  Knowing my dogs, they will eat them, throw them in the air, and they will end up all over creation.  So my father, Mikey, and I have started shoveling out the stones and sifting them. 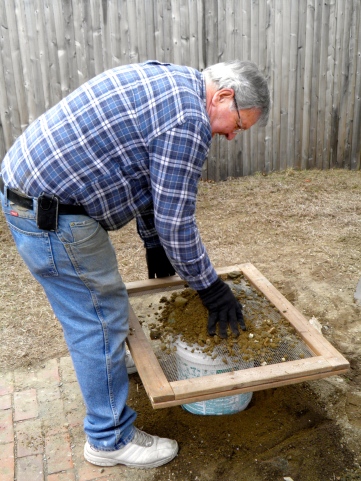 One thing you need to know about my dad… he LOVES to sift. Sift, sift, sift!  He always says “the dirt always comes out better this way!”  I think it ends up like powder and is harder to manage, but if it makes him happy- sift away!

The three of us managed to rake up a huge section of moss/crab-grass/stone and it looks a hell of a lot better.  We will continue to work our way down.  I’m trying not to feel anxiety as I look at all those stones… I’ve started pricing out sod, which I think will be the easiest thing to do.  I could potentially wait forever for the seed to catch, and in the meantime my dogs will track in mud through the house.  I think sod is an overall good investment for time and mental stability.

Other yard work for the day consisted of the steps leading out from the dining room slider to the back yard.  I knew from inspection that the stairs were a tripping hazard, but found it hilarious when I started taking them apart.  So the structure of the stairs consisted of cinder blocks around the base, and built up to the top.  However, in the middle was merely mud and bricks on the surface….I’m pretty sure if you were heavy enough you could step right through it.

In one heave-hoe Mikey managed to yank out the whole side- literally the entire side.  Apparently the only thing holding the cinder blocks together was liquid nails.

We pulled the bricks out from the middle, which were merely resting on dirt, and put them aside; they may come in hand later, you never know!

Within 20 minutes, all the steps were ripped apart, and all we were left with was a mound of dirt to sift.  Guess who was all excited about that? Yup you guessed it- Dad jumped right on it- look at his bucket over there with the screen! 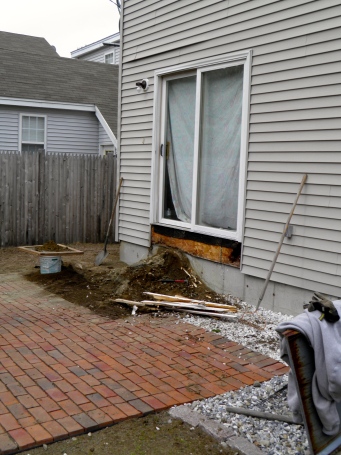 got it down to the pressure-treated wood.  What does that mean? and why should you care?  If you are going to do the work you might as well do it right! The piece of wood on top of the pressure treated wood was peeling, chipping and had some water damage.  Putting on new wood will provide the landing (whatever I decide to do with it) a solid start.  So there you have it, all in a days work!  Back to sifting rocks.  See you in a year <<sarcasm>>.

2 thoughts on “Shovels, and Rakes, and Sifters, OH MY!”